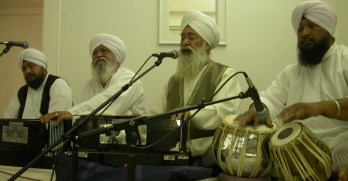 The Brothers Dilbag Singh, and Gulbag Singh (Bhai Dilbagh Singh and Gulbagh Singh Ji) were some of the most prolific Asian Classical Musicians to have ever lived and in the 1980s, the Asian School of Music had the honour of hosting them as visiting musicians where they then acted as a great inspiration to all students in attendance of the school, both young and old. A number of concerts of a world class standard were given for an audience of students of all ages.

The Ragi Jatha of Bhai Dilbag Singh Gulbag Singh was unrivalled when it comes to Gurmat Sangeet. Their singing did not conform to every traditional feature of Gurmat Sangeet. The brothers did not sing any Dhrupad compositions or Partaals as was the tradition. Bhai Dilbag Singh, a humble and straight forward soul who was attracted to the simple things in life would characterize himself as primarily a Khayaliya. Even though the style of the brothers’ music was not traditional, they will be remembered not as Khayaliyas, but as Kirtaniyas. They had both memorized impressive quantities of Bani, and their Parmans would always be rich and fitting to the situation. Their primary musical style, unequivocally, was Gurmat Sangeet. Musically, the Jatha was excellent and completely uncompromising in both of the brothers’ commitment to singing according to the traditions of Raga.

The Ragi Jatha of the brothers Dilbag Singh and Gulbag Singh Ji goes back to its ancestry to Bhai Mardana. The style used by the brothers of singing is very close to Khayal, the predominant regional Asian classical vocal form today. Bhai Devinder Singh provided vocal support to the brothers ,and Bhai Iqbal Singh often played with them to provide a tabla accompaniment. There were occasions where they did not sing any Dhrupad compositions or Partaals.